Of Rips and Magical Musical DVDs

So, if you've kept reading instead of going to complain to someone in authority than I guess that you are bearing the responsibility and want to know how to actually use this.
Save it as something like rip.sh and use it like
./rip.sh filename track
where filename is the base filename you will end up with and track is the DVD track number to extract - if you leave the track blank then it will rip whatever would have played with mplayer dvd://

If anyone does want to submit patches for this, the main features I've been intending to implement are a more flexible command line usage, a better way to extract the audio (that doesn't have the same risk of pressing left/right yet still produces perfectly synced audio), get all the subtitle tracks embedded into the mkv file and convert the DVD chapters into a format that can be embedded into the mkv.
Update: I can't believe that I didn't think of this earlier - simply redirecting stdin from /dev/null solves the keyboard input issue when dumping the audio with mplayer.

As for me, well, I guess I'll just eBay it after all hoping it's not a bootleg and go to sleep.

Update: I'm just going to go over an issue I mentioned in this post - how to deal with media that needs it's aspect ratio corrected. The symptoms of this are generally that while you are watching a video everything just feels slightly distorted - in many cases this will be your imagination playing tricks on you, but if you are fairly certain that it isn't, read on. I'm going to use the music video for "Stick Together" which was on the bonus DVD from the album "Rock Music" by "The Superjesus" as an example. Everytime I watched this it looked distorted, so today I paused it at this frame and used the GIMP to take a screenshot: 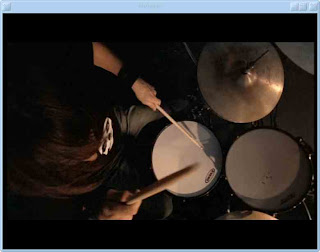 Now, the reason I took the screenshot here is that there is a fairly large (easier to measure) drum (circular object) reasonably close to the centre of the screen (not too heavily distorted by the camera's lens) and facing the camera almost perfectly straight on (avoids perspective distortion). Using the measure tool in the GIMP I find that the drum is approximately 170 pixels wide but about 184 pixels high - clearly the aspect ratio is way out and in this case it wasn't just my imagination (phew).
You will also notice the large black bars above and below the image - these need to be cropped. And here's another reason I chose this video - take a look at this screenshot: 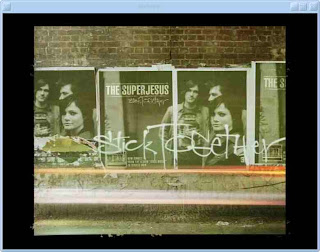 Notice where the black bars are and how large they are this time? This is exactly why it's important to know your source media. If I simply run mplayer -vf cropdetect over this it's going to change it's mind 3 times during playback - within the first second as that fades in it changes from crop=560:496:80:38 to crop=576:496:72:38. Then when the widescreen video starts it decides on crop=688:496:18:38. None of these are correct - the first two would cut off the left and right of the video and the last one will still leave small black bars at the top and bottom. This is one of the reasons why I mentioned that automating cropping is just too error prone. So, what's the solution? Tell mplayer to start playback after the intro artwork is gone of course! If, hypothetically, you wanted to modify my above script to attempt to detect how to crop it, I would suggest adding a line something like this (and using the crop variable in the appropriate place in the video filter chain - I cover this later):

This starts the playback one minute in, quickly runs the video for 5 seconds and gives me a crop parameter of crop=688:432:18:72 - checking this with mplayer -vf crop=688:432:18:72 video.vob looks about right so it's time to move back to the problem of the aspect ratio (you could also crop the video after changing the aspect ratio - just remember to keep your video filters, including cropdetect, in the same order that you are working with).
So, let's see - I have a width of 688 pixels with the drum 170 pixels wide, and a height of 432 pixels with the drum 184 pixels high. Personally, I want to keep the width as is and scale the height to adjust the aspect. So, the currect aspect ratio is about 1.6 (688/432) and I probably want about 1.7 (432/184*170) - plugging this value into mplayer still doesn't look quite right, but I know that this is close to the standard 16:9 (1.7) aspect and a little more eyeballing tells me that's probably a bit closer. What I'm trying to get at here is that despite your best measuring efforts, it's quite difficult to get this exact and you eventually will need to just eyeball it and see if it looks good enough.
So, all together now the filter chain will look something like this:

Breaking that down:
1. Deinterlace the video before any other processing (the absolute last thing you would ever want to do is scale first and then try to deinterlace, unless of course you like to make your eyes bleed).
2. Crop the black bars away (again, if you altered the aspect ratio before cropping the video this would be at the end of the chain).
3. dsize is used to change the intended aspect ratio used by all the following video filters (but doesn't change the aspect ratio itself).
4. Actually change the aspect ratio: a width of -1 tells it to use the original width (688 pixels), and a height of -2 tells it to scale the height using the other dimension and the intended aspect ratio.
Ok, I have lied a little - my source media is actually not interlaced in this case, so I did not use the kerndeint filter, but I wanted to drive home the point about the importance of getting the video filter order correct - I've seen it done wrong. My eyes started to bleed.
Posted by DarkStarSword at 02:08 No comments: