My main desktop box has been running this nifty little program called MythTV for over a year now. MythTV is a home-brew Personal Video Recorder for Linux, which essentially means it's kind of like a VCR, but on steroids. It downloads TV guide data from OzTivo and once a week I go through the program guide sorted by genre to see if there is anything on that sounds like it might be worth watching. Then I check it's list of Upcoming Recordings to make sure I don't have any conflicts, resolving them if necessary and go away.
Every now and again when I have some time I bring up it's recorded programs view, pick something to watch, check that it's automatic commercial detection has done it's job making any necessary corrections (which usually takes less than a minute), sit back hit transcode (to permanently remove those commercials as well as reduce the file size) and enjoy the show.
If I'm not at my computer at the time, I can access MythTV remotely using the MythWeb plugin which lets me change my recording schedules remotely and even stream recorded programs to me. It also integrates with the MythMusic plugin which I have found handy on a number of occasions when I've been working on an assignment in a computer lab on campus and wanted some decent music to listen to ;)
Some months ago, I noticed this program in the guide called "Scrapheap Challenge" airing daily on ABC2. The description sounded interesting so I told MythTV to record it on a daily basis. Since then MythTV has not missed a single episode as all of season 9 was aired and then rolling back to the original season 1 from 1998 and showing every episode since (at the time of writing ABC2 is now up to season 7).
Each episode Scrapheap Challenge pits two teams of three members and an expert against each other to build some contraption that has to perform a specific task out of the junk they can find in a scrapheap in only 10 hours (except for some special episodes). The idea for the show came from a scene in Apollo 13 where the astronauts only had a short time to construct a carbon dioxide filter from whatever parts they could find on their space capsule. The show is hosted by Robert Llewellyn (who it took me a long time to realise played Kryten in Red Dwarf all those years ago) and Lisa Rogers (prior to season 5 it was Cathy Rogers) who offer entertaining (and sometimes ridiculous, especially in the episode introductions) commentary throughout the show.
Anyway, the reason for this post is mostly a plug for the show as I have been thoroughly enjoying it and highly recommend it to any aspiring engineer or indeed anyone with a technical mindset.
Posted by DarkStarSword at 22:42 No comments:

It's amazing what technology can do these days

So I was at a friends stopping the night, but unable to sleep I eventually decided to call a cab to take me home. Small dilemma: I didn't want to disturb everyone who was asleep in the house any more than I had to. But not to worry, Nokia came to my rescue!
First, I didn't know any more detail than the suburb I was in so I started Nokia Maps on my N95 (my "Mobile Modem", but that's for another post) which fairly quickly acquired a GPS fix even though I was indoors and gave me the street and even number I was at.
The web browser on the N95 is somewhat limited and although I could browse to the Canberra Cabs website with it and get their phone number, I could not use the online booking facility. Calling them would clearly disturb those sleeping around me (and I'm not even sure it would be possible given the setup I've got), so I pulled out my Nokia N800 Internet Tablet. Using my N95 as a bluetooth modem I pointed the Mozilla based browser to the Canberra Cabs website, filled in my details and within just a few minutes was in a cab spending the rest of my money for the night getting home.

Now to sleep.
Posted by DarkStarSword at 05:30 No comments:

My good friend Chris just sent me this photo taken at linux.conf.au earlier this year. I'm on the left, Jason's on the right, and well, you can see what's in the middle ;) 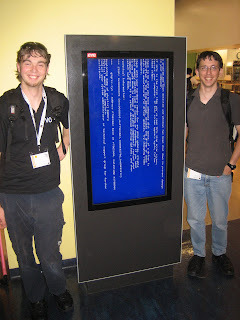